Once upon a time in a land far, far away, I had a pretty pan that had some interesting features. It was marked “Odorless” on the bottom, and carried a patent date of October 17, 1893. It looked similar to a skillet, with pour spouts at 4:00 and 8:00, and it had an interesting raised edge with holes along the top edge. It had a hollowed handle with a raised number 8 on its underside. It was identical to the pan in the top center of the photograph above.

I have no idea why this pan recently popped into my head; I haven’t had it for almost two years. But popped in, it did. I became curious about who manufactured it – I believed Griswold – and how it worked. That small spark of curiosity led me down one long journey into the world of Odorless Skillets. In fact, it was such a long journey that it has resulted in two blog posts about Odorless Skillets.

At the beginning of my rabbit-hole journey, I just wanted to know how my pretty pan was intended to be used, and who manufactured it. My little bit of curiosity led to a lot of research and all sorts of twists and turns.

The skillet was meant to be used with a cover, as shown in Figure 2 and Figure 3 of the patent drawing. Without a cover, of course, the “odorless” function of the skillet would not be effective; vapors would just waft into the room.

I dug deeper, looking for a positive identification of the manufacturer of the skillet. To me, the fine casting of the pan suggested that it was made by Griswold. Additionally, one of the Griswold reference books showed an odorless skillet said to be manufactured by Griswold. It was similar to mine, down to the grooved handle and pour spouts at 4- and 8-o’clock. However, my pan had a raised number 8 on the underside of the handle and the Griswold one in the book did not. The Griswold pan was marked with a pattern number of 869; mine was not. The lettering on the Griswold pan was also larger than the lettering on the my pan, and the font on the number 7 in “17” was different.

I inquired of the fine folks at the National Archives as to the assignor of the Hailes patent, thinking that might answer my question as to who made my pan. While I was waiting for a response, I went to the collectors at the Griswold and Cast Iron Cookware Association (“GCICA”) Facebook page. The rabbit hole deepened.

Pennsylvania collector Leroy Lasher shared with me a photograph of five odorless skillets from his collection. The pans were very similar. The pan in the top row, middle, matched my pan. All five of Leroy’s pans are marked ODORLESS. Four of the five carry the patent date of October 17, 1893. Two of the pans have  8 holes at the handle and 21 holes opposite. The other three pans have 10 holes at the handle and 23 holes opposite. One of the pans has a pattern number of 869, which according to the Wagner and Griswold “Red Book” is a Griswold pattern number. One of Leroy’s pans, however, identifies the maker as “Skinner Safety Kettle Co., Erie PA.” Four of the five carried the Hailes patent date of October 17, 1893.

Leroy told me that he was aware of just one Odorless skillet in this style that he was missing – that being the Odorless skillet pictured at page 133 of the Red Book, which had a raised molder’s mark of JR on the bottom. The Red Book pointed out that the raised JR was “very similar” to the raised initials present on a round griddle made by Griswold which is alleged to be the last piece cast in the Griswold plant in 1957 (Blue Book, p. 55). The Red Book also shows a Odorless skillet with a ghost mark of “E__E” (presumably “ERIE”), which was either cast by Griswold or was made using a Griswold skillet as the pattern (Red Book, p. 133).

Another collector also on the GCICA Facebook page shared a photograph of his Odorless skillet which carried the “Skinner Safety Kettle Co.” marking. That collector pointed out that there was a Skinner Company in Erie, PA., so he was not convinced that the skillet was made by Griswold. I went looking for the Skinner Company.

There was indeed a company named Skinner in Erie, PA in the late 1800s, but it was the Skinner Engine Company; they manufactured high speed steam engines and boilers. (Iron Trade Review, Vol. 27, 1894).

As I was muddling through all of this information, I received a response from the National Archives. The “Archives Specialist” (I can’t decide if I would love that job or hate it) was kind enough to send me screen shots of the written record of the assignment of the Hailes patent. On January 6, 1892, the patent was assigned to E. C. Skinner and Bro., Albany New York.

“E. C. Skinner and Bro.” of Albany, New York was apparently part of the Capital City Malleable Iron Company; they manufactured hollow ware. As of 1888, they were manufacturing a “Patent Safety Kettle.” 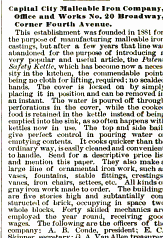 The Albany company – not the Erie company – had the Hailes patent for the Odorless skillet. That does not mean, of course, that they manufactured the skillet; they could have jobbed it out. Did they?

My conclusion is yes, they had Griswold manufacture the Odorless skillet for them in Erie, Pennsylvania. We know that Griswold manufactured pieces for other companies under different names (e.g. Merit, Best Made, Puritan); this appears to be no different. The casting on the piece is beautiful; satin-smooth as is characteristic of early Griswold.  The fact that one of the pieces in Leroy’s collection is marked Erie, PA, tells us that the pan was manufactured in Erie – home of Griswold. The 3-digit pattern number (here 869) is also a hallmark of Griswold; they typically put pattern numbers on their pieces. The odorless skillet in the Red Book with the ERIE “ghost” also tells us that Griswold made the piece (or someone used a Griswold piece as a pattern; my conclusion is the former given the other facts).

The 1893 Hailes patent was not the only patent for an odorless skillet, however; nor was it the first. I had posted some questions about my odorless skillet on the Griswold & Cast Iron Cookware Association Facebook page, and experienced cast iron collectors stepped up to help me on my quest for more information. You can see more about the Odorless skillet – and some variations – on my first blog post on the topic.

Have another variation of the Odorless skillet? I’d love to see it and add it to the blog. Email me through the contact form.