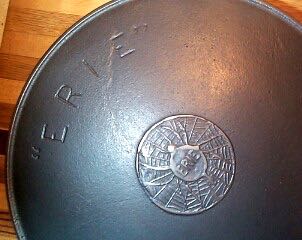 *Note from Mary: You can learn even more about your cast iron cookware here.

UNDERSTANDING LOGOS AND OTHER CAST IRON

Hopefully, this will take the mystery out of the confusion of  Griswold’s many logos frequently referred to by collectors of Griswold.  It is not as refined or detailed as a historian would make it, but it is a quick reference for the person who wants to know what he looking at logo-wise. Date-wise, some of the logos overlap.

1865-1883    SELDEN & GRISWOLD  The oldest of the Griswold logos would be the joint venture of the two families, Selden and Griswold, who joined forces to produce cast iron products, like the mailbox and the cuspidor or spitton. The logo Selden Griswold can be found on the inside flap of the mailbox or on the underside of the spitoon. Collectors aren’t apt to find many of this old logo. 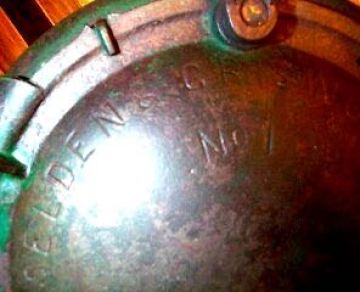 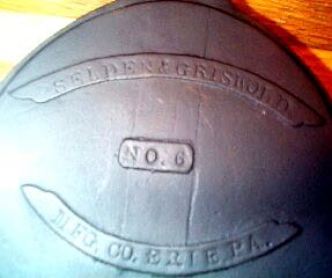 1865-1909   ERIE or “ERIE”  Some of the finest cast iron cookware products came from this early time period.  The walls of the skillets were thinner but often much nicer than the later period iron.  More than 100 years later, they are still very functional skillets with great patina. 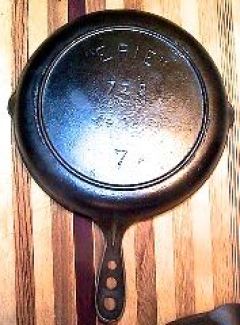 1874-1905    SPIDER & WEB This emblem of a spider in a web seems to be limited to the #8 “ERIE” skillet and the size #7, 8 or 9  “Erie” teapots.  On the skillet bottom, following the curve of the skillet, is the large lettering “ERIE”.  Additionally, in the center of the skillet bottom is a spider web, with a spider whose body is made of a skillet with the word ERIE inside it.  The big “ERIE” is frequently in better condition than the spider logo because “ERIE” was incised while the spider logo was raised and so came in direct contact with the surface of the stove, causing wear on it from the frequent movement across the stove.  It is difficult to find one of these skillets with the spider logo in excellent condition. Nevertheless, any of the spider logos, both good and just decent, are in big demand. 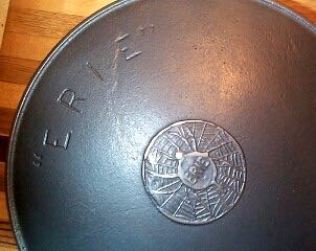 1884-1909    DIAMOND ERIE  The elongated diamond contains the word ERIE, with both of the E’s being much smaller than the R and the I which follow the outline of the diamond—ERIE.  I’ve seen this logo on a four inch toy and on a variety of griddles. 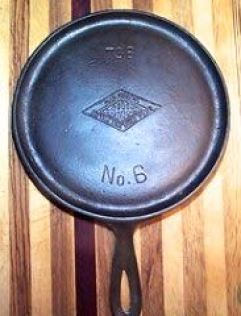 1884-1912    GRISWOLD’S ERIE  Notice the apostrophe in this emblem.  The skillets in this series run from the smallest, #6 to the largest #12.  Number 10 in this series seems to be among the missing.  Also from my observation, the #6 and #9 appear to have been the most frequently produced sizes.  This logo is found in other items as well, even in the wood handle for the cold-handle sad iron. (insert 2 pictures: –443.jpg & –446.jpg 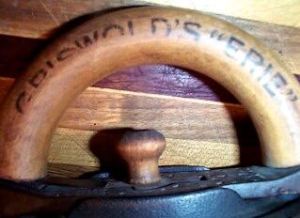 1897-1957  GRISWOLD within a cross. The logo most often associated with the antique collectible world is this logo, the cross with the word Griswold inside it.  But it changed over the years, and the medium and small sized emblems of this type are the least favored among collectors.  After 1940, much of the “good metal” was gone and the production of dimished quality cast iron was underway. 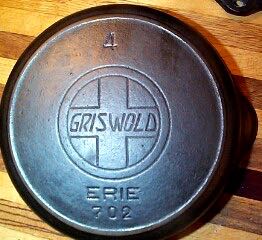 After this period came the slant  EPU logo.  All this refers to is an abbreviated method of saying that the word GRISWOLD is lettered within the double circle and cross in the slight slanting to the right, rather than straight up and down block lettering style.  Underneath this double circle and cross with GRISWOLD,  it will state  ERIE, Penna., U.S.A. in block style lettering. 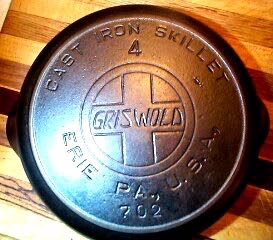 About 1920, the company introduced the last of their greatest logo products, the block EPU logo.  These continued until about 1940.  There’s no mystery in understanding this logo either.  The word GRISWOLD was block lettering style, rather than slanted to the right like the older slant or italic style.  It was still within the double circle and cross. Underneath, it still said Erie, Penna., U.S.A., just like its older counterpart.

The medium and small logos have a skinny cross in a double circle with Erie, Penna. under it.  They are not logos in demand by most collectors. However, they are a bargain for individuals wanting to cook in good Griswold as they are in the lowest price range. So, if you want good quality without straining the pocketbook, go for the small logos. 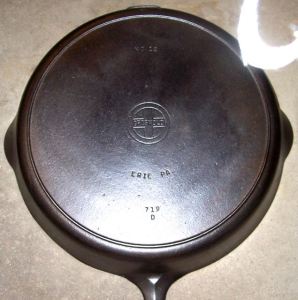 The “double stamped logos” are taboo among most collectors of fine cast iron.  They bear BOTH the name Griswold and Wagner, after Wagner Mfg. Co. of Ohio ended up with the defunct Griswold Manufacturing Company. Usually the logo without the city of manufacture, ERIE, is a signal that it was not made by Griswold Manufacturing Company and should give you pause for thought.  I’ve seen this occur with ash trays in particular.  Any Griswold item not manufactured in Erie is not associated with that company.  Examples of this would include the film splicer out of New York or a stove manufactured in Georgia. 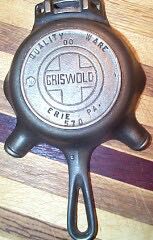 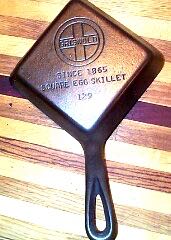 Smoke ring (or heat or fire ring).  Some skillets have a rim that runs the entire circumference on the bottom.  This rim kept the heated surface slightly elevated above the heat source.  It is usually abbreviated in reference as SR. Whether it has a smoke ring or not can be a huge difference in the value of the piece.

Smooth bottom (as opposed to SR above).  Skillets without smoke rings are referred to as smooth bottom skillets.  They lack that rim going around the entire circumference on the bottom of the skillet.

Pattern number (or PN)  Griswold Manufacturing Company wasn’t always very consistent with their identification of pieces; nevertheless, many of their cookware pieces were identified with both a size and a pattern number.  An example would be a number 8 trivet for a dutch oven, with PN 206.  Many muffin pans can be identified as Griswold  by pattern number only.   On occasion, a letter might accompany the size or PN.  These seem to indicate a run series, and generally can be ignored.

Extra finished or Plated.  When the cast iron products were coated with an outer finish of nickel or chromium, they were extra finished.  The finish was either dull or polished.

Hammered.  Metal that was deliberately dimpled in manufacture is hammered.  Hammered products are tougher to locate than regular items.

Hinged.  When a lid and bottom were hooked together as a set, it is referred to as hinged. Examples would be found among skillet/lids; dutch oven/lids, and even waffle irons/bases.

Porcelain or enamel finish.  Starting in the 20’s, Griswold began to produce some porcelain or enamel finished items  in four colors: turquoise blue, canary yellow, jade green and mandarin red.  They seemed to coat just the outside of skillets and lids in the porcelain while the inside remains black iron.  In the 30’s, they changed colors and expanded their porcelainizing to a variety of cookware styles, like covered casseroles, fish boats, even individual dutch service ovens with lids.  These newer colors were usually two toned, like red with cream  or yellow with gray.  All of the porcelain items tend to bubble in manufacture causing pinholes in the finish or to chip and stain from use. It’s hard to find them in mint condition.

Note from Mary: Doris had an article published in Antique Trader on December 9, 2011 about “How to avoid fake Griswold and Wagner cast iron cookware.” You can find it here.