Ask Mary: Why is the center bottom of my old pan rough?

I have a youtube channel, and received a comment from Kathleen O on one of my vids with a pan that had pitting:

“I hear the that the “pitting” is caused by use over fire or old wood stove. Does this mean old wood stoves burned hotter than conventional modern day stoves? Both the stove and the skillet were/are made of cast iron. I have an antique cast iron wood cook stove and there is no pitting on it even over the fire box so why is it the skillets seem to get the pitting and not the stoves? Could it be that maybe there were more impurities in the iron ore used to make skillets than in the ore used to make stoves? I own a pre-Griswold Erie (no quotations marks) that is very pitted yet there are many of the same generation skillet that are not pitted at all…how is this explained?”

Full disclosure: I am not a chemist. If you are, and you want to make any corrections or additions to my comments below, please do! You can also contact me and give me the information, and I’ll add it here.

It is not at all uncommon to see antique cast iron pans with roughness in the center area on the bottom of the pan. That roughness was likely caused from cooking over old coal-burning stoves with “stove eyes,” when the cover of the “eye” had been removed. This is commonly referred to as “sulfur pitting.”

Over the years, I’ve looked for a simple explanation for the pitting because – as mentioned – I’m not a chemist.  Here is my understanding: In the simplest terms, when coal is burned, sulfuric acid forms. When sulfur-laden gas from burning coals in an old oven mixes with air, moisture forms and condenses. It will corrode the metal it directly contacts.1. Given the small size of stove eyes, the coal gas concentrates in a particular area of the pan; that would be the part of the pan that corrodes from the sulfuric acid. 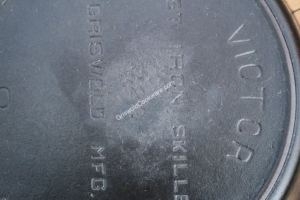 In addition, the type of the type of gas used for cooking stoves in the early 1900s could also cause corrosion, as it was made from coal. 2

“For about 150 years from the early 19th century, the gas used for heating, cooking and lighting was called town gas. Unlike natural gas, town gas was made from coal, which is why it was also called coal gas. After the gas had been taken out of the coal, what was left was a fuel called coke. People use to burn coke in their fireplaces and boilers for warmth and hot water.”3 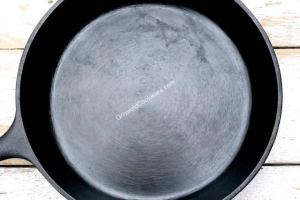 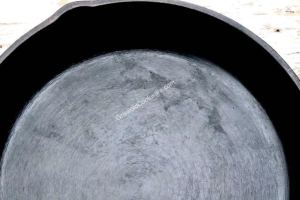 I hope you’ve found my little explanation helpful – again, if you have additional knowledge, we welcome it and please comment or contact me!

Yes, You Can Still Use Your Vintage Cast Iron Pan Even if it Has A Hairline Crack
The “Griswold” Silver Pup Scandal

2 thoughts on “Ask Mary: Why is the center bottom of my old pan rough?”