The Lodge Manufacturing Company is the longest-running cast iron foundry in America. It is and has always been family-owned. Joseph Lodge started the company in 1896 in the small town (pop. ~3500) of South Pittsburg, Tennessee.

Joseph Lodge began the business when he leased his original foundry from the Tennessee Coal, Iron, and Railroad Company in 1896. He named the company “Blacklock” after his friend and minister, Rev. Joseph Hayton Blacklock. The foundry produced sad irons, sugar and stove kettles, English pots, ham boilers, 3-legged skillets and ovens, lids and more. Most products produced by Blacklock were “unmarked,” meaning they did not carry the Blacklock name. 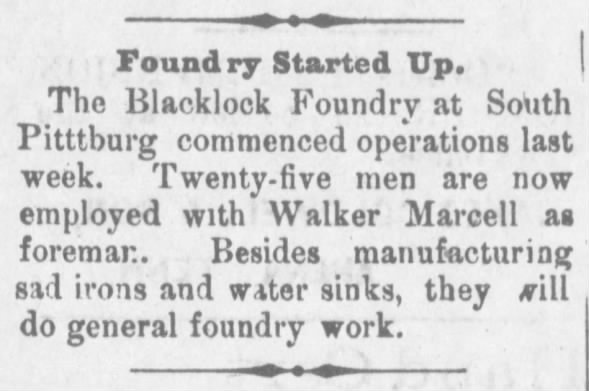 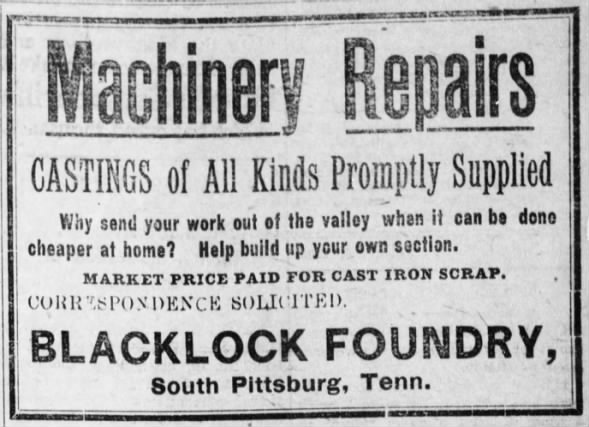 Blacklock had its share of employee unrest, as was common at the time. The “union” vs. “non-union” dispute was heated. 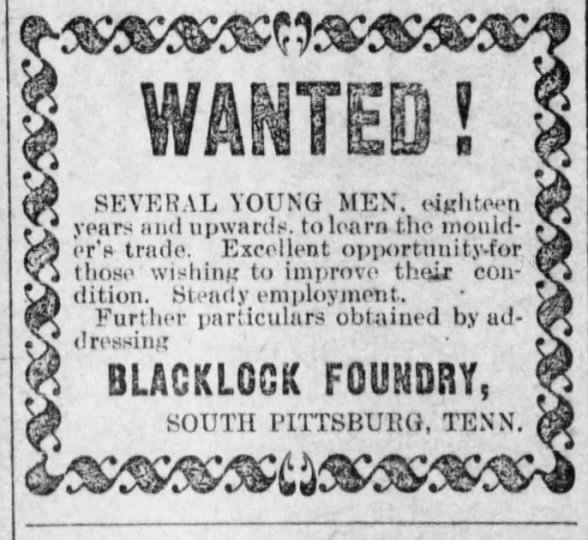 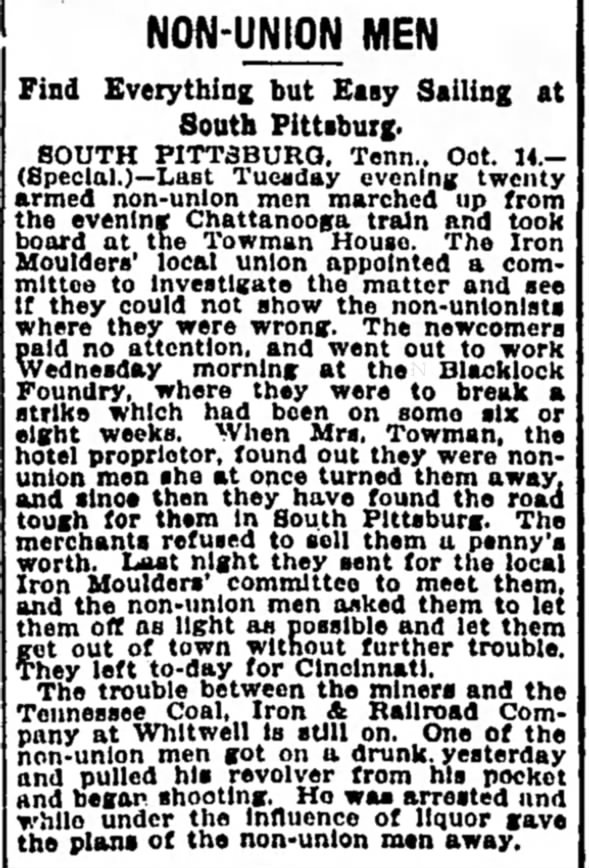 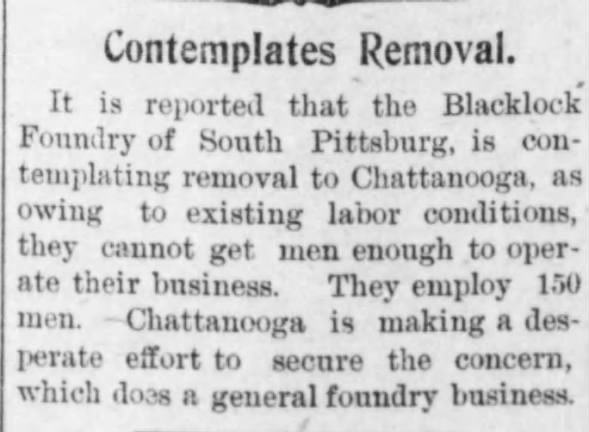 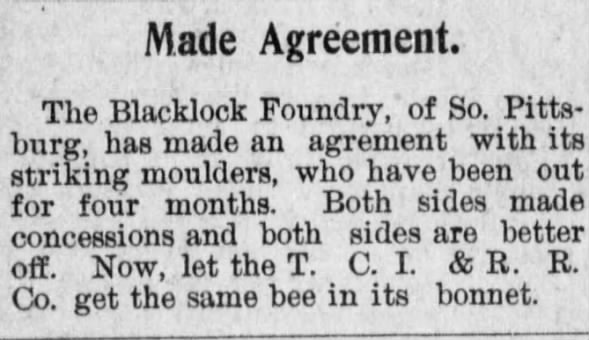 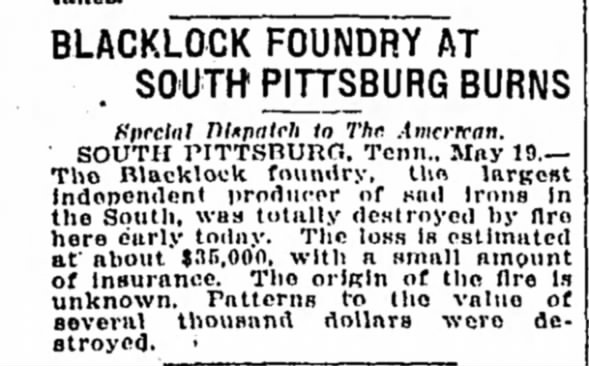 Blacklock was in operation only from 1896 to May 1910 and the fire consumed the foundry. Thus, there are few Blacklock records. Old company catalogues are often used to help identify old unmarked cast iron hollow ware, but there are only two known catalogues of Blacklock pieces – one written in English and one in French. Unless a piece is marked with the name “Blacklock,” the best one can say is that it “may be,” “looks like” or “could be” a Blacklock piece.  While the pieces are believed to have certain characteristics, known unmarked Blacklocks are elusive at best.

Joseph Lodge purchased a meadow a few blocks south of the original foundry for $6,000 after the fire. He built a new foundry and named the company the Lodge Manufacturing Company. The first pour at the new Lodge foundry was on August 26, 1910. 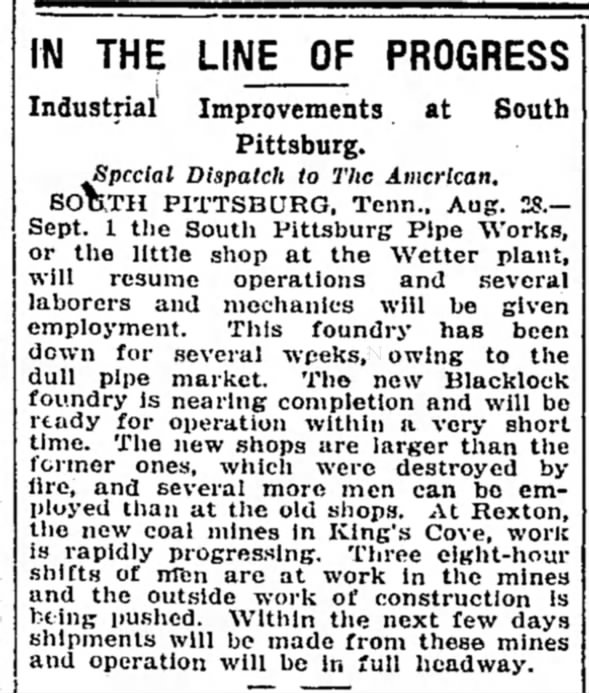 The Lodge plant still stands on the property purchased by Joseph Lodge. It has greatly expanded and modernized over the years.

Cast iron manufactured by Lodge prior to the 1950s was made in the same manner as in other old foundries; by hand-pouring into sand molds. Lodge started automating certain processes in 1950. The company bought a “Disa-Matic” machine  in 1964 that fully-automated the casting process. Along with the automation came an increase in weight of Lodge pieces, as well as a more textured surface than that seen on early pieces.

Lodge collector Harold Henry refers to the Lodge Manufacturing Company – and the family that leads the company – as “survivors.” That they are. While many foundries have fallen by the wayside, Lodge has survived – and paid its employees – through good times and bad. Lodge manufactured certain novelty items during the Great Depression – gnomes and dogs and such – to keep the company afloat and to provide a paycheck to employees. Some of collector Grady Britt‘s most-prized pieces are cast iron dogs that he believes were made by Lodge during the depression.

Lodge began pre-seasoning its cast iron cookware as part of the “Lodge Logic” line in 2002. Previously, Lodge had dipped its pieces – through an automated process – into vats of “hot carnauba bean wax.” Good Housekeeping awarded Lodge a “Good Buy” award for its pre-seasoning process, as recognition for having created “a groundbreaking product that solves an everyday problem.” By 2007, all of the cookware produced by Lodge was pre-seasoned.

Sales of Lodge cast iron show no sign of slowing down. During our amazing Lodge foundry tour, we learned that sales have doubled since Lodge began pre-seasoning its cookware. That jump is also reflected in its number of employees. In 2005, Lodge had 185 employees. Today, there are 470.1 Lodge’s output has grown so much, in fact, that it opened a second foundry a few short blocks from its original foundry in 2017.  The first pour was on November 20, 2017.

Lodge now has 5 DISA-matic machines. Each can make 350-400 molds an hour, and each mold may have multiple pieces.

Lodge also ships globally. When I interviewed collector John Clough of Chester Virginia, I was surprised to learn that there is a large market in Japan for Lodge. Some pieces produced by Lodge are available only in Japan.

Lodge provides tours of the foundry to the public only the last weekend of April, during the annual “National Cornbread Festival”.  The festival is a big event (its website touts more than 27,000 attendees), with tours, music, food, a cornbread cook-off, street dance, carnival, and more. Lodge began hosting a “collector’s tent” in 2017 during the festival, where collectors showed off prized pieces. CEO emeritus Bob Kellerman spoke in the collector’s tent and told some stories of Lodge history including his run with the Olympic torch in 2002 and the development of the Lodge “Mickey Mouse” gem pan.

Lodge is a great buy, especially for someone starting out in cast iron. They are hardy easy-care pieces. The pieces are also great for car camping and cooking over an open fire. Lodge stands behind its products, and the price point is the best out there for quality cast iron.

As Lodge Collector Harold Henry says, “Lodge must be doing something right.”

Additional resources about Lodge which I found particularly interesting and/or helpful:

C. Millhiser, From Hand Pour to Automation, a History of Lodge Manufacturing Company from 1896 to 1988 (available for purchase at the Lodge Factory Store).

The Lucky Dogs of South Pittsburgh, from “The Bitter Southerner”

The Lure of the Large Vintage Cast Iron Auction, and Twelve Handy-Dandy Tips!

**Most recent update 10/10/18. We’re at 13 tips now. I keep thinking of more tips! 🙂 It’s easy to become quickly overwhelmed when you arrive at a large in-person cast iron auction. Yards and yards, tables and tables, of all of that gorgeous iron! And […]