Old Cast Iron Glue Pots. No, Not for Me. 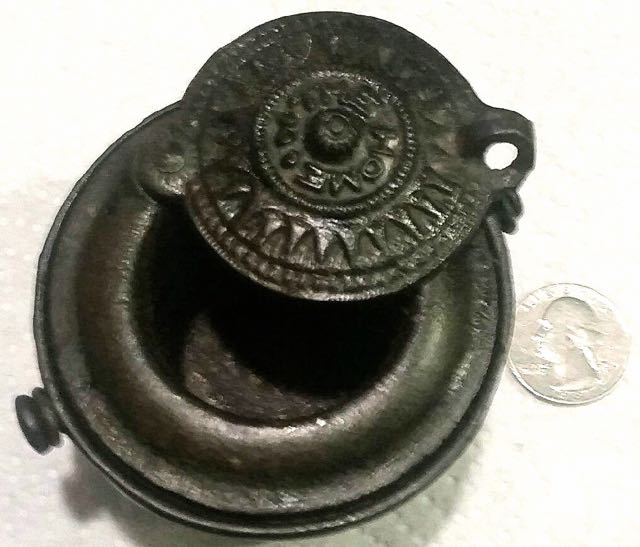 I’ve mentioned many times that I love thinking about the history of these old pieces of iron – where they have been, how they have been used, and who used them. Here’s a piece that led me in a totally different direction!

I was recently at a flea market, and I ran across a pretty little cast iron pot with an interior removable cup and lid. I seemed to recall that it was a glue pot. I’ve never had an interest in the glue pots, but for some reason this one captured my attention. I took a few photos and sent them to my cast iron collector friend Russ Howser. I know Russ has an interest in the small pieces, so I figured he could shed some light on the origin of the pot for me. Indeed, he did.

I don’t know if I thought that it was just a container to hold liquid cement or what I was thinking, but once I delved in to topic, the story went much deeper. Russ told me that the old glue pots were used to melt animal hide glue back in the day. Glue was made from the hooves, hides, and bones of animals. Apparently, that is where the saying “the horse was sent to the glue factory” came from. I imagine that I have probably heard that saying at some point in my life, but it’s one of those things I would have tried to forget and bury deep within the recesses of my memory, never to be thought of again. Until now.

The white and yellow glues, epoxies, and cements that we typically see today came into commerce in around the 1950s; after World War II. Prior, animal hide glue was the glue of choice.

“In 1899, the Milwaukee tanning industry established the U.S. Glue Company factory in Carrollville [WI] to make glue from remnants and scraps of animal hides, both tanned and untanned. During the 1930s, the U.S. Glue Company sold the factory to the Peter Cooper Corporation, who then sold the factory in 1976 to the French pharmaceutical company Rousselot. Manufacturing of glue continued at the factory until it closed in 1985.”

That particular Glue Factory has since been demolished, but the stench remained when one tenacious blogger visited the rumored-to-be haunted buildings. A longer walk-thru is found on youtube for those of you who care to see a spooky abandoned haunted glue factory. A succinct study of the Peter Cooper Corporation – and the massive harm caused to the environment by his glue factories, can be found online. The New York site in Gowanda is an EPA Superfund site.

Hide glue is still used for certain purposes, such as bookbinding, piano work, repair of old furniture, and in some instances, by artists using rabbit glue to size their canvas. Hot hide glue has a fast bond time, does not creep, brings joints together as it dries, and can later be removed if necessary. Rabbit glue apparently causes a greater shrinkage to the artist’s canvas than does the typical gesso, hence a tighter frame. You can find rabbit glue to this day at art shops, woodworking shops, and at Amazon.

Excerpt from 1794 on how to make hide glue (from this source):

“On the Making of Animal Collagen Glue–When you wish to make some glue, do thus: take some limed skins, and put them into lukewarm water to soak right through; wash and clean all the flesh tissue and dirt off them, and put them in to clean water in a copper vessel to boil. Watch for when they come to the boil and begin to thicken, and strain off either with a woven strainer or a cloth, otherwise they will burn, and then put in more water; repeat this two or three times, straining off until they are completely dissolved. If you cannot find limed skins, use unlimed ones, choosing the skin from the feet or ears of oxen, and any skins that cannot be put to any other use or are of little value. If they are thick it does not matter; buffaloes and ewes are also good. Deal with them thus: take some quick-lime and put it into a pestle with some water and mix it until it is all dissolved; put the skins in this solution and leave them for a week, until every single hair has come off them. Take them out, wash and clean them thoroughly and let them dry. Whenever you want to make glue, do as we have written above for you. But if you are in a hurry and have no lime, in order to soften the unlimed skins soak them and then put them on to boil for a short time; take them out and clean them well of any fat and flesh tissues and cut them up in a chopper so that they will be boiled more quickly; do not separate the pieces completely, but leave them joined together so that you will not be hindered when you come to strain them off. Boiling the skins like this you will obtain some glue. If you want to dry the glue, put the last of the glue alone on a low fire and let it boil until it coagulates, only watch it well as it may froth up a lot, and you must therefore be present when it is boiling so that when it froths up you can take it off the fire and put it in a vessel of cold water so that it touches the bottom in order to stop it rising. Put it back several times on to the fire until coagulates, and then take it off and leave it to cool. Stretch a piece of string in a bow-saw, cut them into small pieces and leave them on a board for two or three days until they begin to harden; then pass string through them and hang them up in the air to dry completely, and keep them for when you want to lay gesso. See that you always prepare glue in cold weather, as it smells if the weather is hot, and you will not make such good progress.” (Dionysius, 1734)”

As for the “modern” method to make hide glue:

“This method [Dionysiyus’] of preparing glue was used up to the beginning of the 19th century, and in some places even later. Since that time, glue has been produced industrially.

It is not worthwhile for an artist to try making glue using ancient techniques, such as the method described by Dionysius. The quality of this glue will be considerably lower than the quality of glues prepared industrially and using inferior quality glue can create problems in the final product, such as scaling, formations of cracks, and the like.”

And if you’re really interested in how hide glue is made (I am not, but in the interest of being thorough…), you can see one person’s step by step process here. The hide glue which needs to be heated for use was and is sold in strips and pellets. The strips and pellets were melted in the small pot which is contained within the larger pot.

Iron glue pots were good for this use as iron of course retains its heat well. Hide glue needs to be melted – typically at about 140 degrees. Once it is removed from a heat source, the glue sets very quickly – typically within a minute. You can see a lovely assortment of old glue pots here.

The outer container would be partially filled with water. The glue pellets or strips/pieces would be placed into the interior pot, and the interior pot placed within the larger pot. The pots were then placed on a heat source – I imagine a wood or coal oven with the stove eye cover still intact. The water would heat around the inner pot and melt the glue (typically at about 145 degrees) without scorching it as could happen if the glue pot was placed directly over the heat source. Because the inner pot would be kept within the hot water surround, which would be kept hot by the cast iron, the pot could be brought to where it was needed – i.e. a table that needed a repair – as opposed to bringing the table to the glue pot on the stove. 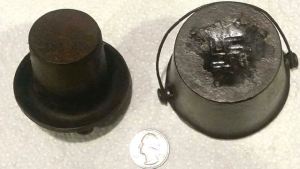 So this was an interesting exercise for me and I learned quite a bit. Despite my appreciation for the beauty of these small pieces, however, and thoughts of how they could be used to store small things around the house (paper clips, anyone?), I don’t think I’ll be hunting for one to sit and gaze at and think about where it has been and how it was used. Nor will I be eating any more gummy candies or gelatin. Nope, no glue pots for me, despite their attractiveness.

Thanks to Russ Howser for the background and the photos!