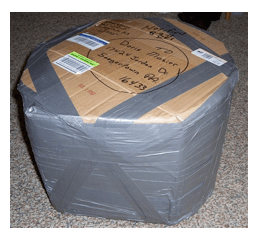 DON’T DO THIS AT YOUR HOUSE

After finalizing the deal to buy a 13 Griswold Dutch oven in “ready to use” condition, I sent out the check to the individual who had contacted us.  We did not know him.  Then began the wait.  Each time I called to check on the progress of mailing it out, he had another excuse.   Finally he declared, “I’ve got it boxed and ready to mail.”

“Good,”  I exclaimed, “and don’t forget, you need to pad all six sides so the Dutch oven won’t touch the box and possibly get damaged.”   He assured me he understood and would pad the trivet, put it in the bottom of the Dutch oven, pad the lid and put it upside down over the Dutch oven, and place all in a box large enough to leave plenty of room all around for padding, just like I told him.  He was to send it priority mail insured.

Ten days later, the box arrived, 4thclass delivery.  Weighing 29-30 pounds, the weight was all in the Dutch oven and trivet.   We shuddered as we attempted to open it.   You can see a “box” was fashioned around the shape of the Dutch oven. Other than the thin cardboard in cut slats, there was one layer of bubble wrap.  It took literally 20 minutes and a cutting blade to free the Dutch oven from the box.  I think maybe the duck tape saved it.

Checking it over, we found no cracks, breaks, or damage—amazing.  We also were realizing that what the seller meant by “very good condition” was not our idea of a clean piece.  It took another day of soaking in lye and then in rust remover to get the crud off.  All of that happened before the wire brushing.  Who knows?  Maybe he’s on to something, but it is not the way I’d send out cast iron in the mail.  For gosh sakes, if you’re mailing or getting iron, be sure to take padding precautions to avoid headaches and heartaches over broken iron.  Improperly packed, the post office will not reimburse you for your loss.

Saving graces—the seller DID bubble wrap the trivet and place it on the bottom of the Dutch oven and he DID pad the lid with bubble wrap and put it upside down over the Dutch oven. We still can’t believe that awkward heavy package, thinly wrapping the Dutch oven, made it intact to our doorstep. Don’t do this at your house!

Fellow cast iron enthusiasts Brenda Bernstein and Doyle Pregler live in New London, Minnesota, a small community about two hours northwest of the Twin Cities. They have been together 28 years, have 6 grown children between them, and 12 grandchildren ages 3 to 19. If […]