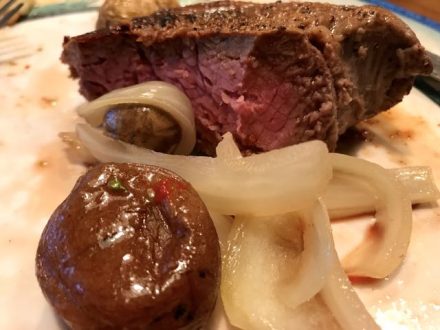 I recently went up to the southern shore of Lake Superior in Wisconsin to visit with my friends Louise and Tom, who keep their 35’ sailboat at Siskiwit Bay Marina in Cornucopia. I’ve come to visit and tent camp alongside their slip many, many times over the 23 years that they have kept a boat at the marina. We have had wonderful memorable times, great summer sails, and awesome walks along the beach with our dogs over the years.

I have never, however, come to visit this early in the season. Ours was a particularly cold winter this year, and Spring was slow to arrive. In fact, it had felt like we skipped Spring altogether and went right to summer. The week before I came to visit, it was 98 degrees in the Twin Cities.

The weather took a turn for the worse on my way up to the shore. I arrived early Friday evening, and Louise helped me to set up my tent in gusty mid-40-degree weather. Louise, Tom, and I spent the rest of the evening nibbling hors d’oeuvres and visiting in the salon of their boat. By the time I went to bed on Friday I was wiped out and had no trouble sleeping. I had my tent, cool-weather sleeping bag, a few extra blankets, and a toasty tired Maltese to keep me warm. 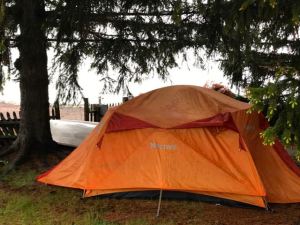 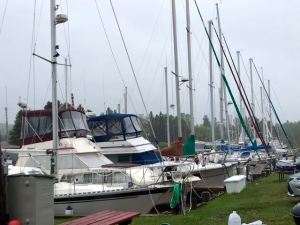 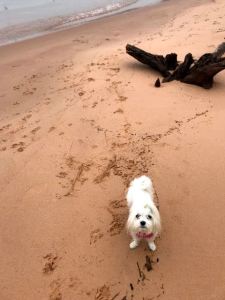 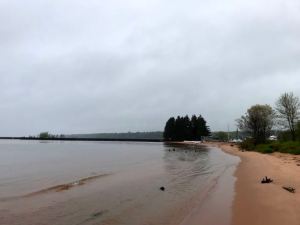 On Saturday, however, the temperature dropped even further. It seemed to me it was about to snow. Rain started shortly after noon. It wasn’t just sprinkling, it was sheeting. Louise and I sat in the salon and worked on our computers, while the rain and wind whipped around the boat. The boat was rocking and clanging. Tom went to a friend’s rustic cabin nearby – the friend was away but had asked Tom to look after his cabin.

We had planned to grill steaks outdoors alongside the boat for dinner. Because the rain wasn’t letting up, however, we decided to join Tom at the cabin.  As we drove over to the cabin, the temperature gauge on the car announced it was 39 degrees. Louise turned on the seat heaters and defrosters.

The cabin is small, charming, and rustic. Tom had a great fire going in the wood-burning stove for us, which cast a pleasant warmth. Maisie and Meg the Golden Retriever settled down to sleep and Louise, Tom, and I started preparing dinner. 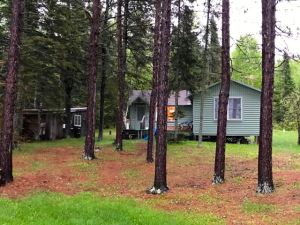 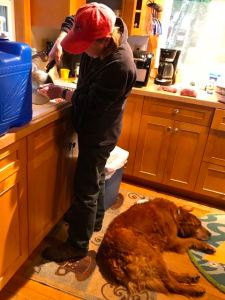 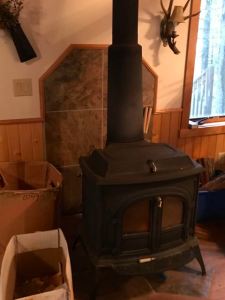 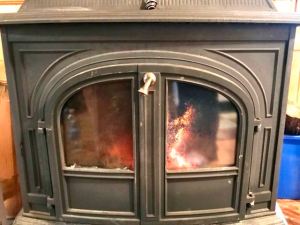 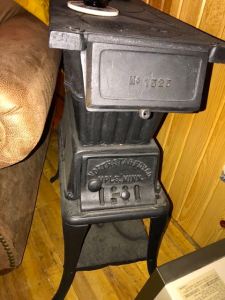 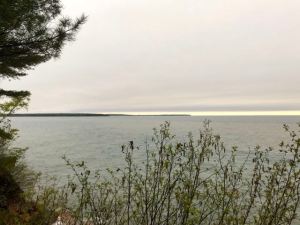 In digging around the sparsely-stocked cupboards for supplies, I spied a crusty globby old Birmingham Stove and Range (“BSR”) no. 8 cast iron skillet. I snatched it and set to cleaning it sufficiently to use it to cook dinner. Yes, I used some soap. I didn’t know where that pan had been or what the chunks were, and if I was going to eat something cooked in that pan, I wanted the chunks of unknown material removed.

I used a green scrub pad and a bit of Dawn, and worked on the pan til most of the crud was removed. The bottom had rust on it so I gave that a scrub too, but I wasn’t worried about the bottom so much as the food wouldn’t touch that surface. I dried the pan thoroughly with paper towels and gave it a spray and wipe down with a canola cooking oil spray that I found in the cupboard. 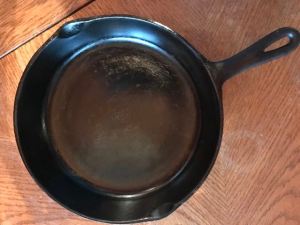 Louise and Tom are steak experts, and they prefer their steaks medium rare. I am a medium to well-done kind of girl. I don’t think Tom and Louise have ever let me cook steaks for them before over the 30+ years I have known them, but I was so excited about my cast iron pan find, that they allowed me to try.

And, they were delicious!

HOW TO: COOKING STEAK IN YOUR CAST IRON SKILLET

We were all happy, including the dogs who had a bit of leftovers.

As a side note, after dinner Louise and I headed to a nearby pub, where I crushed her at Ms. PacMan, as I have done for the past 23 years. 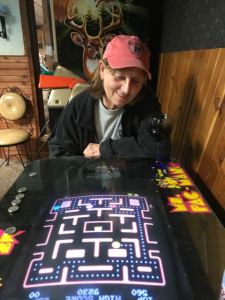 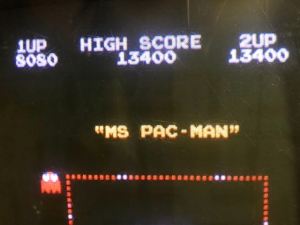 In the morning – after I spent a 32 degree night in the tent – we all headed back to the cabin, where we used the leftovers and a few eggs to make a tasty egg steak scramble hash. I found a few more neglected cast iron pans in the cupboard – another BSR and a dandy unmarked Wagner chicken pan and lid, and cleaned them up for our absent host as thanks for his hospitality. 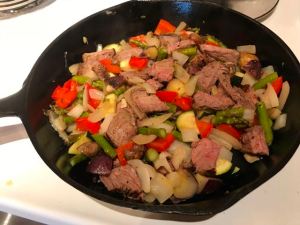 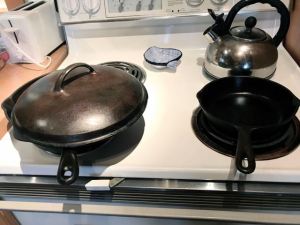 All in all, a great weekend!

In my quest to find out who had manufactured a pretty antique Odorless skillet I used to own, I uncovered a huge amount of information. So much so that I’ve written two blog posts about the topic! To understand the Odorless skillet and other kettles/pans […]