It’s really kind of amazing the vitriol that spews from some folks on the issue of using soap to clean your cast iron pans. I have a youtube channel, and occasionally people comment on my vids. On one of my videos where I used a bit of dish soap to clean a pan, I received a nasty comment from a keyboard ninja threatening violence against me for my use of soap on MY pan. Amazing. I’ve been searching for it but I think the ninja must have deleted it – perhaps he realized he was overreacting just a tad.

For your reading pleasure, I took a couple of screen shots from people commenting on my vids on the “soap no-soap” issue. When people get behind their keyboards – vs. a face-to-face discussion – sometimes decorum goes out the window. Hence “keyboard ninja.”

From a video where I was cleaning a Griswold cast iron muffin pan and used a drop of soap:

From a video where I was cleaning a Griswold cast iron oval roaster two days after having made a delicious roast in it:

There are very strong opinions within the cast iron community on the issue – particularly in the “No Soap! Never!!” camp. I’m not in that camp. Sorry “no soap” friends; I hope you will still be my friend even though I use soap to clean my pans when I want to use soap.

Using a bit of dish soap on a properly-seasoned cast iron pan will not remove the seasoning. This is supported by science. Take a look at this short vid from the Knowridge Science Report, this article from Serious Eats, and give a listen to this podcast from “Ask A Clean Person” (interview with Daniel Gritzer, Culinary Director at Serious Eats). Just as I found with my youtube vid comment, Daniel noted that “People get so violent about [the soap issue]!” A gentle cleaning with a bit of dish soap – as opposed to mad scrubbing with a soap-filled SOS pad or steel wool – is not going to remove the seasoning.

I posted a little poll on the Griswold & Cast Iron Cookware (GCICA) Facebook page. After two days, the “Yes” soaps had 178 votes, and the “No” soaps had 80. The comments to the poll were interesting.

The instructions for the poll said:

“Question is: Do you ever use soap to clean your vintage cast iron after its use?
I’m talking routine cleaning after use to cook food, not pans that you clean after finding them and before seasoning them.
Answer is only ‘yes’ or ‘no.’ So if you never ever do, the answer is no. If the answer is ‘only if I really think it needs it’ or ‘once in a great while’ or something similar, then the answer is ‘yes.'”

I felt I needed to clarify what “yes” means, as people have such particular views about cleaning their vintage pans. I was trying to get at “if you EVER” use soap, you are a “yes” response.

I was particularly interested to hear from the “no soap” people. “OMG Never,” “Never,” “Never use soap,” “No never,” “No one uses soap. This isn’t a complicated question that requires assistance with figuring out what a ‘yes’ or ‘no’ response means.”

Even with the “yes” responses, there was much clarification. “Once [in] a blue moon, if there is anything stuck to the cook surface that was cooked in grease, then let it stand in soapy water for 30 min. Then scrub clean using plain water. Then dry and whip thin film with oil and store for next use,” “Yes but very sparingly and sometimes not at all,” “I will if I have a little stuck on that won’t come off with green pad,” “depends on the circumstances,”  “I only do it, if its real greasy, its only in soapy water for seconds.”

I did some googling on the issue, and it is no wonder that people have differing viewpoints about the soap issue. Various sources – including some that you would presume to have done their research – give different conclusions on the great “soap / no soap” debate. Just for fun, I’ve set some forth below. 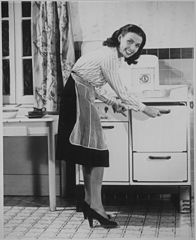 CLEANING IRON—QUICK FIXES By Doris Mosier PROBLEM:     BUILT UP CRUD & GREASE SOLUTION:  LYE For one piece: You well need a plastic bag & easy off oven cleaner. Don’t get the unscented Easy off as it won’t work well.  Get the original Easy Off Oven […]

Cast Iron, General, Cleaning
-
by Doris Mosier
Ask Mary: What Kind of Cooking Spray Can I Use?
Rustic Cabin Sirloin Steak Made in a Rustic BSR Cast Iron Skillet

1 thought on “The Great Soap Debate”