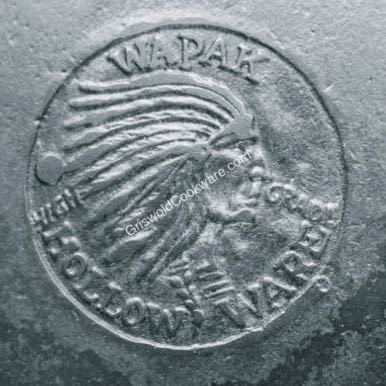 The Wapak Hollow Ware Company was formed in 1903 by a group of five men in Wapakoneta, Ohio. The Company was in business until 1926, when it declared bankruptcy.

Wapak is best-known for their highly collectable line of “Indian Head” skillets and waffle irons. The “Indian Head” pieces have a distinctive trademark – a Native American in full headdress and the words “Wapak High Grade Hollow Ware.” Pieces that have clear and distinct markings – even showing the definition of feathers on the headdress – are particularly sought-after. These pieces are finely cast and polished and rival the quality of Griswold and Wagner pieces of that era. They are so popular that reproductions of the “Indian Head” pieces have been found. The reproductions are poorly cast, and do not have the same distinctive handle as authentic Wapak pieces.

Aside from their line of “Indian Head” pieces, however, Wapak is not known for its fine quality. Many – if not most – of the products produced by Wapak were made using pieces manufactured by other companies, i.e. Griswold. Because they were cast using other products as the “pattern” from which the Wapak piece was made, the casting is often rough with sand shifts; not nearly as fine of a casting as the product from which it was cast. It also is not uncommon to see skillets cast by Wapak that carry the Wapak name that have “ghost marks” of other manufactures (particularly ERIE and Griswold) names or pattern numbers on them. A “ghost mark” is a term used to describe faint markings left on a cast piece that was made by a different company – remnants of the other company’s mark are left on the newly-cast piece.

There is also a Wapak pan that has a marking known as the “chicken foot.” That is where the “P” in “WAPAK” has a split at the bottom, with the two ends pointing in opposite directions – like a split end on a strand of hair.

They also manufactured a lower-priced cookware line carrying the name “Oneta.” The “Oneta” skillets were considered “grade 3” in Wapak’s schememata.

An article from The Metal Worker, Plumber, and Steam Fitter, p. 63 – 64 (Oct. 15, 1904) describes the different levels of classification used by Wapak.