You Meet Some of the Nicest People… 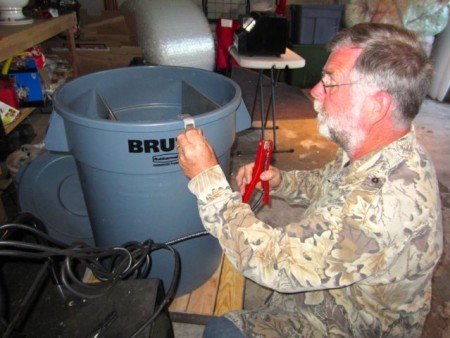 I met Gary Salsman early on in my cast iron selling business. Gary lives in Minnesota about an hour or so south of the Twin Cities. Gary purchased a Griswold Iron Mountain Chicken Pan from me to replace his chicken pan that had a wobble that didn’t suit Gary. We got to talking about our mutual interest in iron, and I learned that Gary is very handy and liked to tinker in his shop. He had made a dandy electrolysis system to clean crusty rusty cast iron pieces that he picked up when he was out hunting for iron.

I am not nearly as handy as Gary. If I recall correctly, at the time my electrolysis system consisted of a tiny battery charger, a blue Sterilite tub, and any number of metal pieces that I picked up at Goodwill and used as the “sacrificial anode” in my system.  I’m not stupid, and I know a good opportunity when I see one.  I asked Gary if he would help me with my electrolysis system.

Help me, he did. From that point on, whenever I needed help with my electrolysis system, Gary was there. He welded together stainless steel plates which were placed in a big blue Brute garbage can. The stainless steel served as the anode – a far better choice than the cookie sheets I was using. Gary even made me a wheeled wooden cart for beneath the electrolysis system, so that I could easily move it about when necessary.

Gary made any number of trips to my home helping me with my system. He never ever came empty-handed. Sometimes he had additional steel plates, sometimes he had maple syrup which he had tapped from the maple trees on his property. Once he had a roll of a particular type of sanding paper, which he found helpful when addressing slight pan wobbles. He gave me a square of a corian-type material and suggested I carry it in my car as it served as a good tool to set a pan upon while out hunting for iron, to determine if the pan had a rock or a wobble. I carried that corian around for years.

Linda and I recently ventured out to Gary’s home. His house sits upon a heavily wooded lot in the country. There is a big antique buggy in front of the house that pretty much announces that you have arrived at Gary’s home. He told us that his “bride” (his wife Bernie) had wanted a yard decoration and had acquired the buggy from an acquaintance, so…there it was. 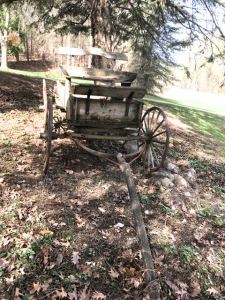 We ventured into the (astonishingly clean) garage to take a look at Gary’s collection of pretty Griswold large block logo cast iron skillets, which were hanging on the wall. We became distracted, however, by the shiny (also astonishingly clean) 1966 Chevelle SS396 convertible, one of about 5400 made. Gary told us how he had painstakingly replaced and/or refurbished just about every piece on that car. The car had a garter on the visor – Gary thought it was likely a remnant of his high school prom. Linda and I oohed and aaahed, and Linda made sure that I took photos of the car for her son Zach, who is a classic car enthusiast and who is himself working to restore an old Firebird. 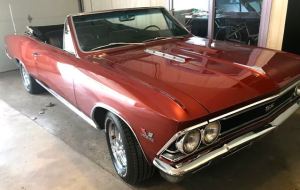 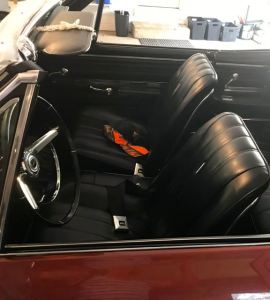 Gary also has a small collection of old iron sprinklers, which he has displayed behind his garage. He told us about each one, pointing out that the largest one cast such a wide spray that it was used on golf fairways. 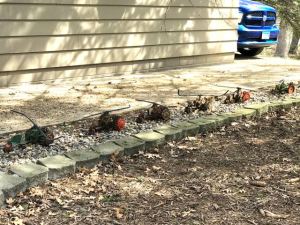 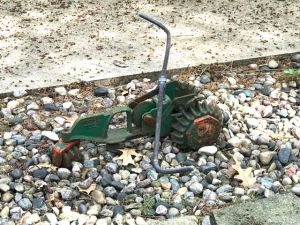 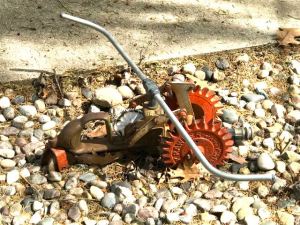 Gary’s shop in his back yard was also astonishingly clean. Linda and I wandered about, checking out Gary’s electrolysis system (which is just like the one I had!), iron and all of the other tools and goodies he had carefully placed here and there in the shop. He has an old “Schwinn ‘Lil Chick Spyder Stingray” bike and an old Schwinn bike that he is working to restore. He also has a small collection of lovely silver hood ornaments hanging on one wall – he rattled off what they were so fast that I couldn’t take it down. The shop was a very pleasant and well-lit place to be. I mentioned that to Gary, and he said that he spent some time after dinner in the shop just about every day. I understood that; If I had that shop I am sure I would spend some time in it every day, too. 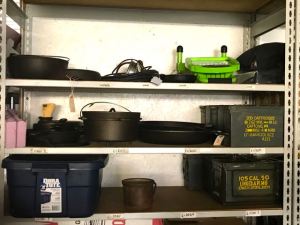 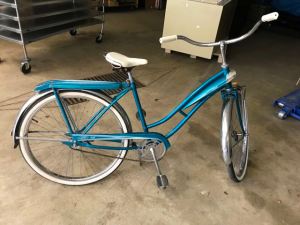 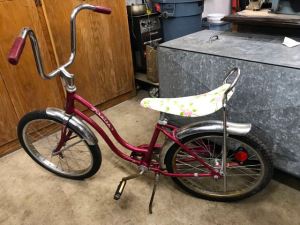 I asked Gary about some ferns he had popping up in his yard. I had heard of fiddlehead ferns, and Gary confirmed that what I saw was in fact fiddlehead ferns. He said that some people ate them, but he surely wouldn’t as he doesn’t eat anything “green or orange.” He said that he also had ramps growing wild, and people ate those, too; sometimes cooking them with morel mushrooms that Gary has also found on his land.

Linda also expressed interest in the ferns and ramps, and Gary offered to give us some plantings. I demurred given that I don’t presently have a yard or garden, but Linda happily accepted. Gary then took us for a stroll through his back woods, pointing out and identifying various plants as we went. He showed us the treehouse he had built for a grandson, and told us that he had also set up a toboggan slide that their grandchildren enjoyed. You can tell that Gary has a big and generous heart. 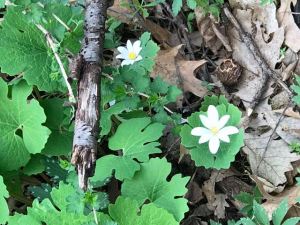 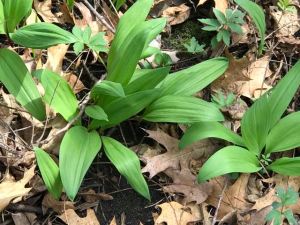 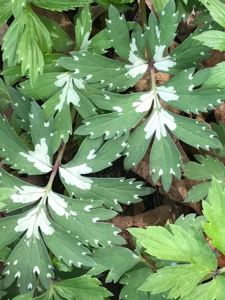 Gary said he would get a shovel to dig up some ferns and ramps. I thought that he would hand the shovel to Linda to dig up the little plants but no, he got down on the ground and dug up some ramps and ferns and put them, along with some dirt, in a bucket which he had grabbed from somewhere. 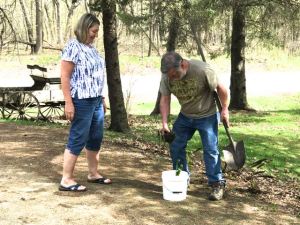 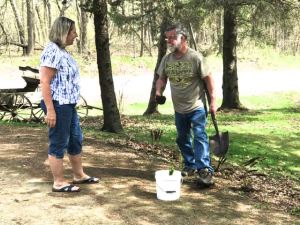 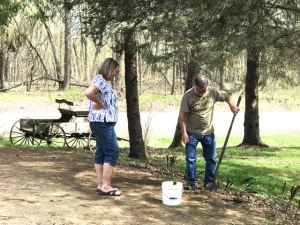 As we got ready to leave, Gary said he had something for us, and handed us each a sealed mason jar, filled with pure maple syrup that Gary had tapped from his trees.

I have met some of the nicest people in my cast iron journeys; Gary is one of them.

How to Make a Cake to the “Brenda” Standard with a Griswold Cast Iron Cake Mold
My Favorite Pan…At Least For Today!